3D Oil Limited (ASX: TDO) was awarded a renewal for four of the original eight blocks that previously comprised VIC/P57 on 7th March 2018. 3D Oil currently holds 24.9% interest in VIC/P57 and continues to carry out subsurface technical work for the permit on behalf of the Joint Venture, operated by Hibiscus Petroleum.

VIC/P57 covers an area of 246km2 in shallow waters of the northwest offshore Gippsland Basin, proximal to existing infrastructure. Geologically the permit lies on the northern flank of the Central Deep and straddles the Northern Terrace, defined by the Rosedale Fault System.

The permit covers the Seahorse Syncline which is formed by a series of tilted fault blocks that dip to the south towards the Seahorse Fault, a regional lineament that extends along the outer southern boundary of the permit.

The Gippsland Basin in southeast Australia covers some 46,000km2, two thirds of which is located offshore. The basin hosts several ‘giant’ discoveries by global standards and is one of Australia’s most prolific oil and gas producing basins, having produced offshore oil and gas since the 1960s. In March 2019 remaining reserves were estimated at 2.7Tcf of natural gas and 220MMbbls of oil and natural gas liquids (EnergyQuest, 2019).

There are multiple play concepts within the Gippsland Basin, with major discoveries located within classic inversion anticlines at the top Latrobe Group (N.asperus to P.asperopolus biozones). These are hosted by Eocene near-shore marine barrier and shoreface sandstones of the Burong Formation and sealed by thick regional shale and marl belonging to the Lakes Entrance Fm.

The Gippsland Basin is considered to be mature given the long production history and declining production rates over the past several decades. Nonetheless, despite having over 400 exploration wells and long exploration history, many parts of the offshore Gippsland Basin are still under-explored and offer significant prospectivity for additional hydrocarbon discoveries.

The approved minimum work programme for the five-year renewal period is as shown below. The primary term of the renewal period, the first three years, was designed to de-risk and high grade the prospect inventory and ultimately progress prospects to ‘drill-ready’ status.

While there are no wells within the current permit area of VIC/P57, there is extensive local well control along the Seahorse Fault to the south, which bounds a large regional anticline that hosts several oil and gas discoveries, including West Seahorse, Seahorse, Wirrah, West Moonfish and Moonfish.

VIC/P57 is ideally situated on the periphery of important hydrocarbon kitchens that have sourced these discoveries. Additional discoveries to the east include Sweetlips and Emperor fields, interpreted to have been sourced as part of a fill-spill chain from the Moonfish area. Other local discoveries include Golden Beach, Mulloway/Whiptail, Barracouda, Whiting and Snapper.

In 2018, 3D Oil purchased 564km2 of the 3D CGG Gippsland Regeneration Reprocessing as part of the first term work commitment, covering surrounding discoveries for detailed geophysical calibration to identified leads and prospects. This has delivered a significant uplift in image quality across the area and has increased confidence in depth conversion over important leads and prospects in the upper Latrobe Group section, which were previously affected by complex velocity variations within shallow formations.

Permit-wide mapping of the latest dataset has improved our understanding of the depth to economic basement and the distribution of the Golden Beach and Emperor Subgroup play fairways across the permit. These plays include the Flinders, Lucifier, Dexter and Kangafish leads, which are low-side, fault-dependent structures along the basin’s northern margin. The leads are on trend with similar trapping styles to other northern margin discoveries to the east, such as the Longtom, Remora, Sunfish and Kipper fields.

Latest mapping has enabled the refinement of the leads and prospects portfolio and identification of two prospects, Pointer and Felix.

Felix Prospect is an anticline with closure across multiple reservoirs within the L.balmei biozone, favourably situated between the Moonfish and Wirrah discoveries along the Seahorse Fault. Migration modelling indicates the prospect is likely to have access to charge from the same kitchen as existing discoveries. The reservoir-seal configuration is well constrained by these wells and excellent reservoir seal pairs are anticipated across the L.balmei zone.

Location of Felix along the Seahorse Fault between Wirrah and Moonfish fields. Note the prevalence of hydrocarbons across the zones of interest at surrounding fields.

Seismic mapping and depth conversion using the new 3D CGG Gippsland Regeneration reprocessing has confirmed Felix Prospect to be a low-risk exploration target. Imaging is now significantly clearer with an exceptional increase in the level of observable detail. 3D Oil believes that it is now possible to understand the trapping mechanism at Felix with far greater accuracy.

The improved velocity model has helped to de-risk the presence of closure in the depth domain across the L.balmei zone and will assist with the selection of a suitable drilling location. Improved depth conversion has also reduced uncertainty surrounding the range of prospective resources within L.balmei reservoirs.

The Pointer Prospect is a combination structural-stratigraphic gas prospect within the Upper L.balmei reservoir. The prospect shows a clear rising amplitude with offset response, a Class III AVO. Improved imaging has permitted high-resolution mapping of the fault architecture and has reduced uncertainty on the trapping mechanism, highlighting a conformance of amplitude with structure.

Rock physics and stochastic modelling studies have provided important necessary constraints and local calibrations to understand the cause of the AVO amplitude anomaly at Pointer.

Based on our understanding of lithological variation between offset wells and the anticipated lithologies at Pointer, AVO forward modelling has shown a strong positive hydrocarbon response, with gas being the anticipated hydrocarbon phase. A clear AVO anomaly has solidified Pointer as a strong candidate to contribute much needed gas to the East Australian market. 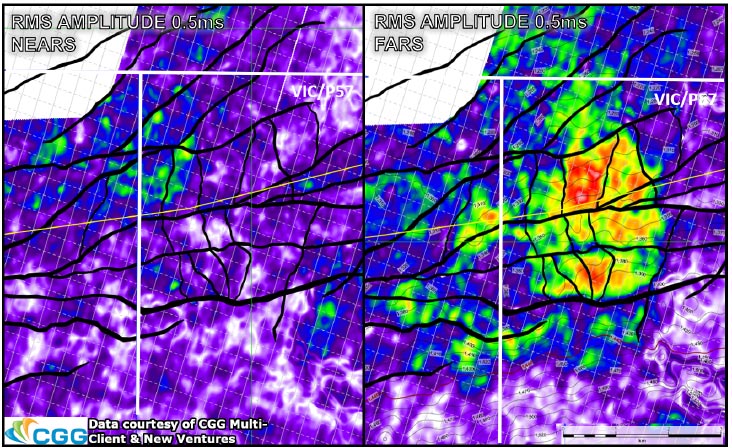 Pointer Class III AVO anomaly showing significant brightening on the far stack, interpreted to be due to hydrocarbons. 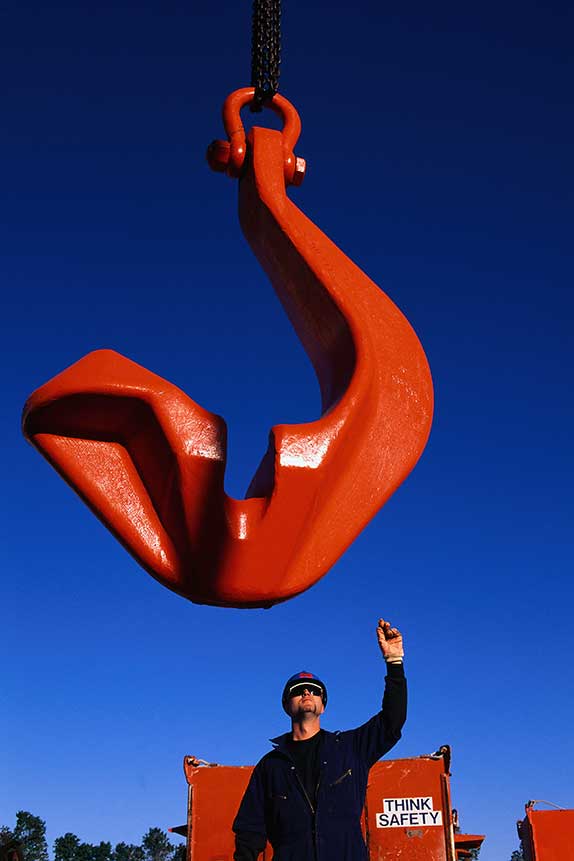