T/49P is located in the eastern offshore Otway Basin, west of King Island, and covers an area of 4,960 km2 in water depths of less than 100m. The permit lies adjacent to the significant Thylacine and Geographe gas discoveries, having a combined GIIP of over 2 TCF. Thylacine Field is the largest gas discovery in the Otway Basin.

3D Oil Limited (ASX: TDO) was awarded exploration permit T/49P on May 22nd, 2013 as part of the 2012 Gazettal round and holds 100% interest in the permit. The Year 5 work program was varied in January 2017 to replace a well with the acquisition of 3D seismic. A further one-year Suspension and Extension was granted for Year 5 on February 20th, 2019, extending the Secondary Term to February 22nd, 2021.

TOffshore exploration began in the 1960 and 70s and despite the basin’s long exploration history, the offshore Otway Basin remains under-explored, especially compared with the prolific adjacent Gippsland Basin. The Waarre Formation is the principal reservoir, hosting offshore gas fields around the flanks of the Shipwreck Trough, a structural depression formed during the Late Cretaceous break-up of Australia and Antarctica.

TThylacine Field commenced production of gas, condensate and LPG as part of the Otway Gas Project in 2007, developed by the Woodside Petroleum joint venture. In 2010, Origin Energy (Lattice Energy) commenced operatorship and Geographe Field was subsequently developed in 2013, located 15km north of Thylacine. In January 2018, Beach Petroleum acquired Lattice Energy and are now planning an additional 4 wells at Thylacine Field and 2 wells at Geographe Field.

Thylacine and Geographe have important implications for the prospectivity of T/49P due to their proximity to the permit and the presence of hydrocarbons within the Thylacine Member, the key reservoir within the permit. In addition, the geochemistry of these hydrocarbons points to a distinct petroleum system that is believed to be operating in T/49P.

TRecent offshore success in the Otway Basin has been underpinned by the acquisition of 3D seismic within the Shipwreck Trough, by increasing the confidence in closures within complex structural terrains and the application of seismic attribute analysis (Cliff et al. 2004). 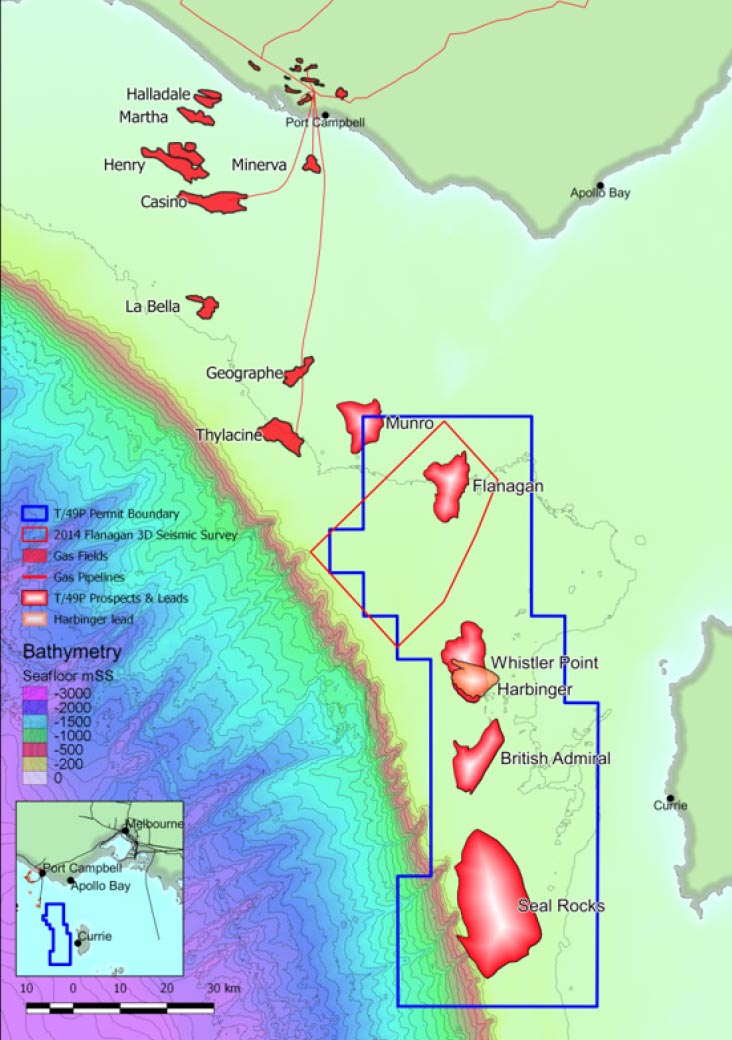 Location of T/49P in the eastern Otway Basin

The approved minimum work programme is outlined below. 3D Oil is currently in Year 5 and preparing for the acquisition of 3D seismic over important leads in the central and southern regions of the permit. In 2019, the company lodged an Environmental Plan with NOPSEMA for the Dorrigo 3D Marine Seismic Survey, which was approved on May 15th, 2019.

The acquisition of 3D seismic will help reduce geological risk surrounding the structural configuration of key leads with seismic amplitude anomalies and will aid in development of a prospect seriatim and selection of a suitable drill target. 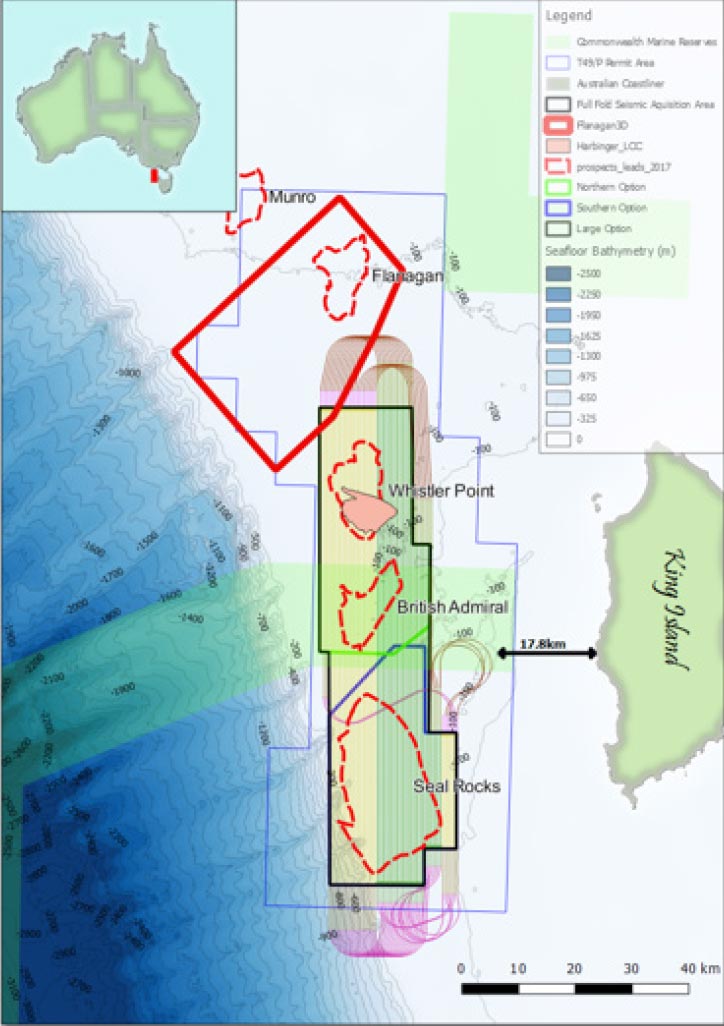 The permit has two exploration wells, including Prawn-1 (1968) and Whelk-1 (1970), and is covered with a broad grid of 2D seismic of different vintages. In 2014, 3D Oil acquired a 974 km2 3D seismic survey in the north of the permit to better define the Flanagan structure, in part due to its proximity to the proven and producing Thylacine Field to the northwest.

Prawn-1 was the second offshore well in the Otway Basin and was interpreted on very poor 2D seismic. The prognosed sections were invalid and the regional top seal, the Belfast Formation, was significantly sandier than anticipated. This well result has influenced later thinking about the prospectivity of the region. However, the seismic character of the top seal changes from Prawn-1 towards Flanagan Prospect and, in addition, gas shows were recorded within the Dilwyn Formation pointing to a potential working thermogenic gas source.

Whelk-1 was drilled on a basement high at the basin margin using sparse 2D seismic. The well is a dry hole and structural closure is interpreted to be invalid. The prospective section was significantly condensed across the high to less than 100m.

A working petroleum system is interpreted to be active within and adjacent to T/49P. Thylacine, Geographe and La Bella fields have a different geochemical signature to other Otway Basin gases, based on chromatograms that indicate these are condensates with an oil-like appearance. Arguably the southern Otway Basin has a different and richer petroleum system than the northern part of the basin.

In addition, the traditional Early Cretaceous Eumeralla source rocks are sufficiently mature for hydrocarbon expulsion within the permit, partly due to loading associated with the development of thick Tertiary clinoforms over T/49P.

Based on existing 2D and 3D seismic data a number of leads and prospects have been identified within the Thylacine Member, including Flanagan, Munro, British Admiral, Whistler Point and Seal Rocks. Harbinger lead has also been defined within the Paaratte Formation, having a strong Class III AVO response.

The commercial attractiveness of exploring for gas in eastern Australia has been boosted by a strongly improving gas pricing environment for producers. In recent years eastern Australian retail gas prices have begun to increase and pressures are expected to consolidate these increases, including exposure to international pricing through LNG exports and the unwinding of major low cost, long term gas contracts. 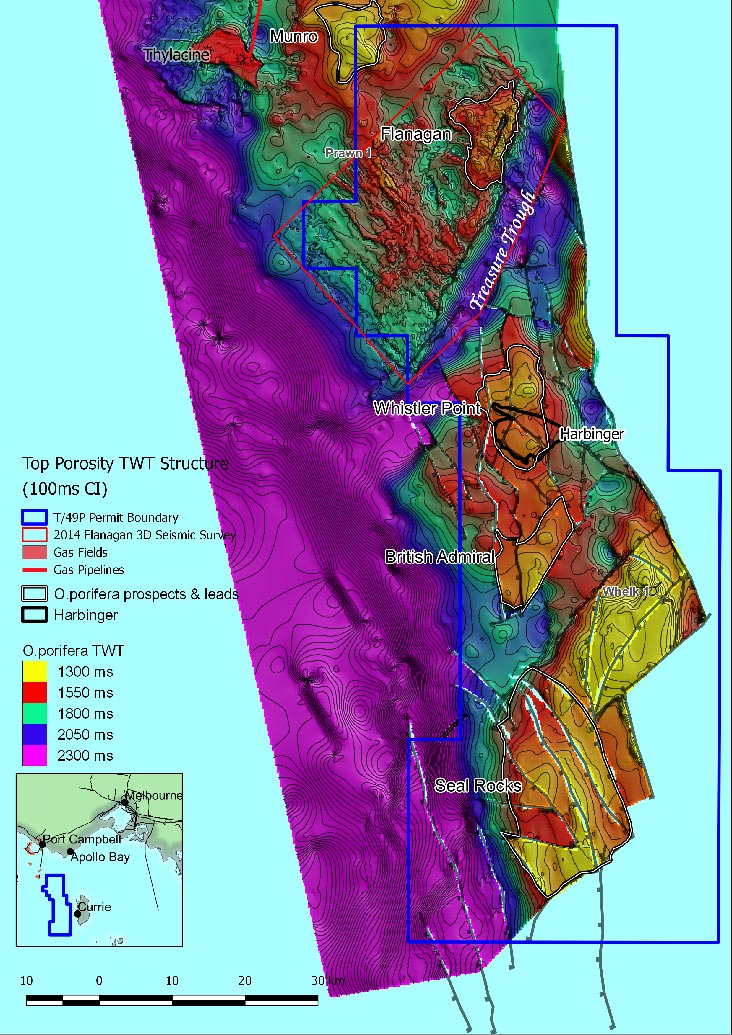 Leads and prospects within T/49P

Flanagan Prospect is a series of tilted fault blocks with fault closure at the top of Thylacine Member, located some 30km southeast of Thylacine Field. The structure was formed by Late Cretaceous extension, and later segmented by transtension. It hosts a Class III AVO amplitude anomaly that conforms to structure.

The reservoir facies at Flanagan is anticipated to be fluvial to transitional marine in nature and is sealed by a thick package with bland seismic character, interpreted to be claystone based on seismic facies calibration to well control at Whelk-1 to the south.

Seal Rocks is a series of horsetail tilt blocks associated with the Sorell Fault Zone within the southern part of the permit, covered by sparse 2D data. 2D seismic reprocessing in 2019 has provided significant improvement in the offset stacks and has highlighted the presence of a series of Class III AVO anomalies fitting structure.

These amplitudes are associated with the interpreted top Thylacine Member, the reservoir at Thylacine and Geographe fields which are located in an analogous location along strike. Seismic facies support the presence of a prospective reservoir and seal.

Seal Rocks is the primary target of the Dorrigo 3D Marine Seismic Survey, which has been carefully designed to ensure that Seal Rocks can be fully evaluated to understand the structural complexities and seismic attribute response at the Thylacine Member reservoir. 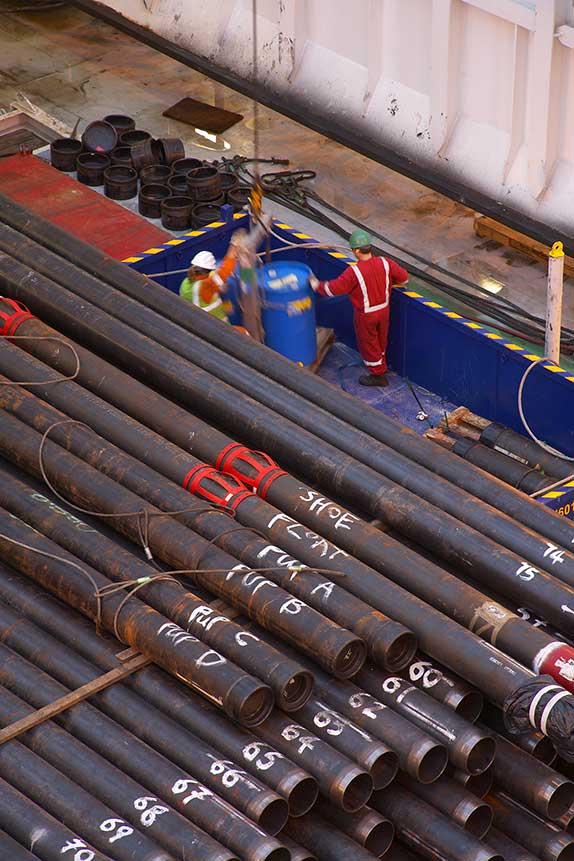